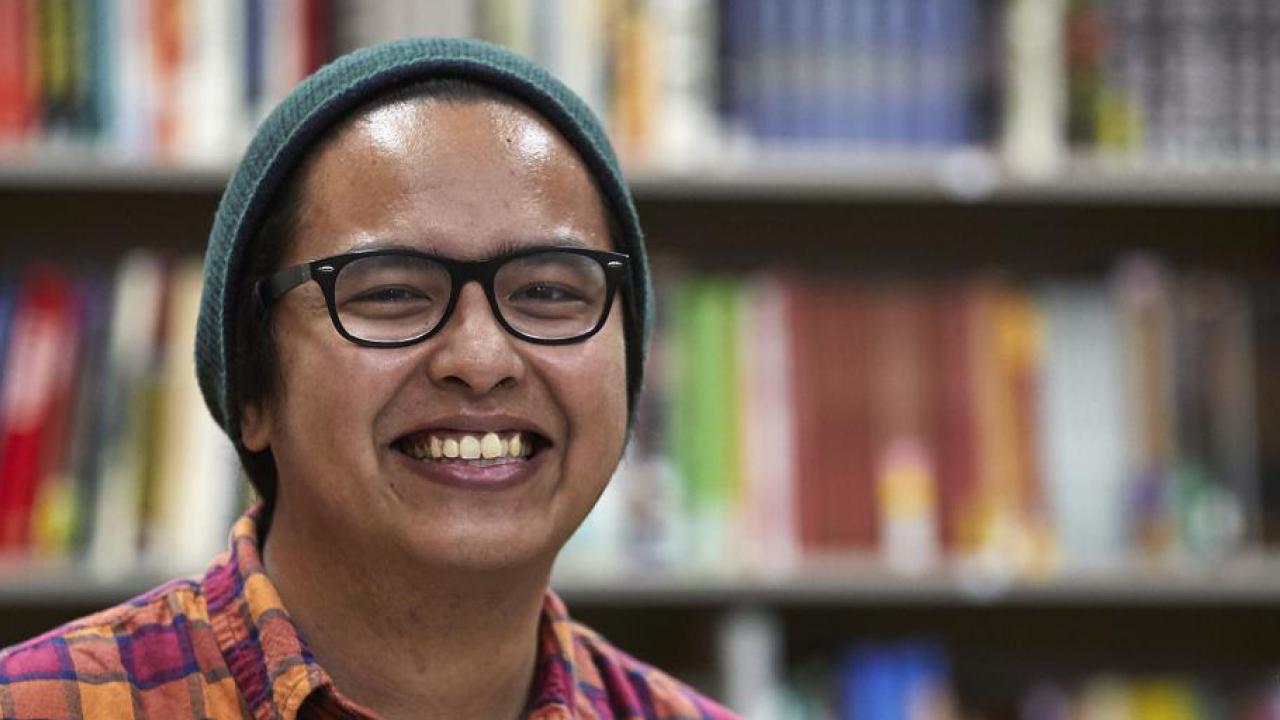 This story originally appeared on the UC Davis Public Scholarship and Engagement website.

Taggueg is an undocumented UC Davis student whose parents came from the Philippines when he was 7 years old. He is in the United States under the Consideration of Deferred Action for Childhood Arrivals (DACA) program and is pursuing a Ph.D. in sociology with a research focus on the undocumented Filipinx population.

Taggueg says his undocumented status was never an issue for him while growing up in Southern California.

“I was brought along on this journey and didn’t have any clue what was going on, to be perfectly honest,” Taggueg said about his move to the U.S. “Within my family, we never really talked about those kinds of issues until I decided that I wanted to go to college.”

Ironically, Taggueg truly began to realize how limited his options were after receiving his college acceptance letters. He couldn’t afford many schools and wasn’t eligible for any federal loans because of his immigration status. He didn’t want to take out any private loans because he wasn’t sure if he could get a job after graduation, again because of his immigration status. Fortunately, his family helped and all pitched in to pay for his tuition, books, and room and board.

“It was a team effort to get me through five years of undergrad,” said Taggueg, who got his degree in psychology and social behavior. “Their support allowed me to get where I am today, which is part of the reason why I think I’m so motivated to use my education to help others.”

A passion for research begins

As an undergraduate research assistant at UC Irvine, Taggueg went with a graduate student on a public scholarship trip to Jasper, Texas. There, they interviewed members of the community to gather data on the long-term effects of a hate crime that occurred in the town in the 1990s.

“The process of going out, talking to people, collecting data and then taking a step back and looking at the patterns to see what kinds of things arise—it was really interesting to me,” Taggueg said. “It was fascinating to see that there are methods out there that allow us to understand the world better. Then, the idea is that you use that work to make a difference and fight for the things you care about.”

He continued, “I think research has incredible power in being an enabler to help move an agenda forward.”

After graduation, Taggueg got a job as an analyst for the Institutional Review Board at the UC Irvine Office of Research where he learned about the role of ethics in the research process as it pertained to the Federal regulations regarding human subjects.

At the encouragement of his mentor, Taggueg decided to pursue graduate school. He decided on UC Davis because of the university’s AB540 and Undocumented Student Center.

“The AB540 Center was like a beacon drawing me to Davis, letting me know ‘you’re going to have support here,’” he said.

Taggueg was accepted into the Robert Wood Johnson Foundation Health Policy Research Scholars Program, which is paying for the majority of his graduate education. The program also is taking his involvement in public scholarship to a new level. Through annual trips to Washington D.C., the students in the program learn how to use their research to make policy changes in partnership with policymakers.

“As public scholars, we undergo this training and acquire these skills and expertise so that we can be a resource for these communities,” Taggueg said, “I don’t want to be the type of scholar that tells people what to do. I want them think of me as a tool that they can use to further their interests.”

Taggueg also was accepted to UC Davis’ prestigious Mellon Public Scholars program where graduate students work with a community partner and faculty mentor to develop a community-based research project. As a Mellon Public Scholar, Taggueg has worked on several research projects including one in partnership with Migrante Napa-Solano, a grassroots organization devoted to defending and fighting for the welfare and rights of Filipino immigrant and migrant workers. As part of this project, Taggueg interviewed immigrants in Napa and Solano counties with the goal of helping improve their access to resources. Taggueg said he learned a lot from the process.

“Public Scholarship is an exercise in trust-building,” he said. “I think it will make me a better scholar by bringing me ‘closer to the ground’ with regards to how things really happen.” He continued, “You have to view community engagement as inherently part of the work that you do. If you have your community behind you, then they are the ones really driving your research,” he said. “If you can harness that, you will feel better in the end. It brings purpose and value to the work you do. You’ll be driven by genuine passion.”

Alleviating my insecurities: Reconciling what it means to find purpose in the pursuit of knowledge.

Growing up undocumented, I had few options in terms of what my future could be.  Going to college was a dream that so few people like me had the opportunity to do, and the main goal I had in mind was to get my degree, get out, and get a job — to keep myself afloat, and stay out of trouble.  However, I was fortunate enough to meet a mentor that took me under her wing and instilled in me the belief in research and the scientific method.

Growing a community at UC Davis

In addition to engaging with the Filipino immigrant and migrant communities outside UC Davis, Taggueg has been a highly involved graduate student leader within the UC Davis community. He co-founded a graduate student group for undocumented students with a group of peers, as well as served as the president of the UC Davis Graduate Student Association, where he worked with the local Graduate Student Union on improving housing options and wages for graduate students. He also helped establish the Bulosan Center for Filipino Studies at UC Davis, which is working on conducting the first nationwide survey of Filipino populations in more than 20 years, with the goal of better understanding forced migration, health, racism, and gender discrimination.

“It gives me a sense of fulfillment to be engaged,” he said. “I do all these things so I can make myself better equipped to serve my community.”

Public Scholarship and Engagement (PSE) is fostering a culture of engagement at UC Davis that increases the university’s impact through mutually-beneficial relationships that have local, regional, statewide, and global reach.

We envision UC Davis research, teaching and learning that serves society and makes a positive difference in the world.