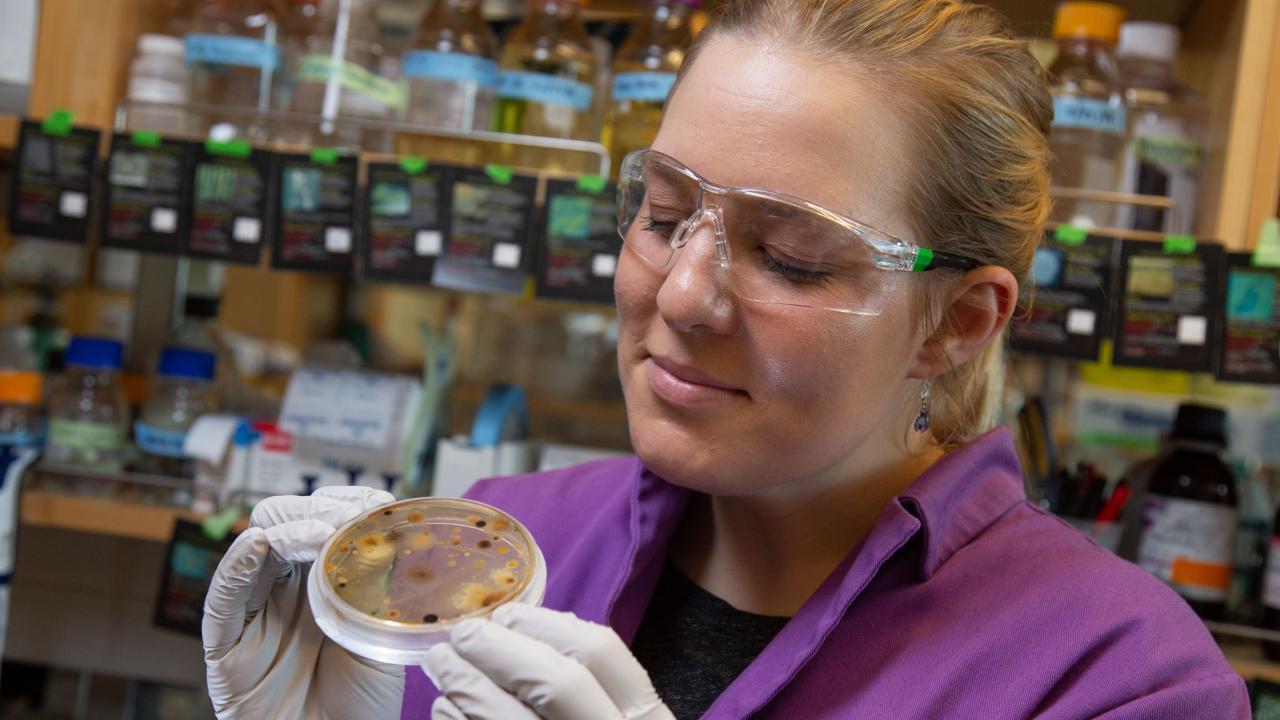 This story was originally published on the UC Davis College of Biological Sciences website.

On the bus ride to visit a friend in Cuenca, Ecuador, Katherine Dahlhausen kept losing consciousness. For days, she hadn’t felt right, but she chalked up her ill feelings to fatigue. After all, she’d spent much of her South American adventure engaging in rigorous activities, like mountain biking down the Cotopaxi Volcano and whitewater rafting in Tena, Ecuador. But something was wrong. Seriously wrong.

In Cuenca, Dahlhausen’s condition worsened to the point where she had trouble breathing. Whatever she was experiencing, it wasn’t altitude sickness as she initially thought. She was taken to a local hospital, where doctors found her lungs brimming with fluid. She also had a high fever; her kidneys, gall bladder and liver were failing; and her heart rate had slowed to 20 beats per minute.

“My whole body was shutting down and so I got medevaced back to the States. I got the right antibiotics and everything I needed,” recalled Dahlhausen, now a Biophysics Ph.D. student.

While Dahlhausen successfully recovered from her bout of leptospirosis, a rare bacterial disease spread through animal urine, her brush with death piqued within her a curiosity about microbes.

How and where did the microbes responsible for her sickness invade her body? She researched the bacteria responsible for leptospirosis, retraced her South American trip and determined that she must have picked up the bug while whitewater rafting in Tena. At one point during the expedition, Dahlhausen’s raft had flipped under a waterfall.

“I was under the waterfall for a long time and in that turmoil, I had smashed my head open on a rock,” she said, noting that the bacteria that causes leptospirosis infects animals by traveling through wounds or other orifices. “That’s where I think I got my infection because I had quite a few stitches and it probably wasn’t the cleanest water.”

With her mind set on studying microbes, Dahlhausen enrolled at UC Davis for graduate studies in fall 2013, following her tumultuous but memorable summer experience in South America. Already, she was aware of Eisen, his extensive research and citations, as well as his prolific social media presence.

“I realize this now, he picks students based on enthusiasm,” said Dahlhausen. “I was not a star student by any stretch of the imagination but I think he loved my enthusiasm and the next thing I knew I was in his lab.”

“Yes, it is true that enthusiasm is one of the main criteria I use in picking people for the lab,” said Eisen. “But I myself was enthusiastic about Katie’s background – double majoring in physics and biology, working after college on microscopy, and being a part of the Biophysics Graduate Group, a topic area in which I have always been interested. So, sure her enthusiasm was a part of it, but there was a lot more than just enthusiasm.”

Together, they brainstormed potential ideas for how to study things like ultraviolet resistance and antibiotic resistance in microbes. Around this time, Dahlhausen heard about how fecal transplants could potentially remedy infections caused by the bacteria Clostridium difficile. This bacteria is usually low in abundance in the human gut, but nuking your system with antibiotics opens up plenty of gastrointestinal real estate for the bacteria. And this can cause problems.

But “fecal transplants had an amazing cure rate of this infection,” said Dahlhausen.

All this was in the back of Dahlhausen’s mind when she was on a trip to Australia with her now husband, whom she met in South America. During a trip to the Australia Zoo, the two noticed a sign posted outside the koala exhibit that showed a baby koala with a brown smear on its face.

“The sign was like, ‘It’s not chocolate,’” said Dahlhausen, noting that baby koalas eat a form of their mother’s feces called “pap” before they start eating eucalyptus leaves. “I just started hitting Matt and was like, ‘That’s microbes!’”

Today, Dahlhausen works in the lab of Professor Jonathan Eisen, who holds appointments in the Department of Evolution and Ecology, the Genome Center, the Center for Population Biology and the Department of Medical Microbiology and Immunology in the School of Medicine.

“Microbes are a part of every corner of our existence,” said Dahlhausen. “They live in places we could never dream of exploring and we discover new ones all the time. I just think it’s such a cool world. They’re fascinating.”

From poo to chlamydia

Dahlhausen wondered, what exactly do koalas gain by eating their mother’s feces? How do they know when to switch from a diet of feces to one of toxic eucalyptus leaves? And moreover, how do they survive on a toxic diet?  She knew the gut microbiome was probably part of the answer to these questions, but what microbes were koalas inheriting from their mothers?

Dahlhausen has had the opportunity to get up close and personal with koalas. Courtesy photo

Intrigued, she started collaborating with researchers at Australia’s University of the Sunshine Coast and the Australia Zoo Wildlife Hospital. But she hit a snag.

“Koalas are so protected; there’s no way we were going to take a juvenile koala and sample its gut microbiome,” said Dahlhausen. “But in that process, I learned that koalas have a high rate of chlamydia in their populations and they were regularly being brought to the hospital to be treated for chlamydia with antibiotics.”

Dahlhausen found reports in the literature and in her own observations that some of the koalas were getting sick after receiving treatments meant to combat chlamydia. She thought that maybe the antibiotic treatments were affecting the microbes the koalas needed to digest toxic eucalyptus leaves. She funded the study by raising money on Indiegogo.

Using several different analyses, “I took all of the microbes that I found in my koala samples and tried to find which microbe was most predictive of whether or not koalas will live or die on this antibiotic treatment,” she said. “And what always came out on top was this microbe called Lonepinella koalarum, and I went to the literature and it’s known as a predominant tannin degrader, which is a toxic compound found in eucalyptus leaves.”

The research was published in PeerJ and made rounds in the science presses, including a mention in The New York Times.

With assistance from colleagues, Dahlhausen continued researching Lonepinella koalarum, culturing the bacteria and sequencing its genome. She’s now searching for the genes responsible for degrading tannins and is investigating the degradation process from a molecular standpoint.

“It’s an oversimplified system because there’s probably several microbes in the koala gut that degrade toxins,” she said. “This project is more of a practice of microbiology and figuring out how to analyze genes and do comparative genomics.”

Dahlhausen continues to showcase an affinity for all things microbes, but chlamydia holds a special place in her heart.

About Graduate Studies at UC Davis

Graduate Studies at UC Davis includes over 100 dynamic degree programs and a diverse and interactive student body from around the world. Known for our state-of-the-art research facilities, productive laboratories and progressive spirit – UC Davis offers collaborative and interdisciplinary curricula through graduate groups and designated emphasis options, bringing students and faculty of different academic disciplines together to address real-world challenges.

“It’s an intracellular pathogen, meaning this bacteria is able to get inside host cells, which in and of itself is tricky,” she said. “To evade all of the host’s immune systems to get inside a cell is absolutely fascinating.”

“It can infect the entire animal kingdom, which I find really cool,” said Dahlhausen. “Chlamydia is really badass.”