2022 commencement speaker’s advice for scientists and everyone

Lindenfeld is Dean of the School of Communication and Journalism at Stony Brook University, and Executive Director of the Alan Alda Center for Communicating Science—a center that is dedicated to helping scientists improve their communication skills using techniques from improvisational theater. She also was the commencement speaker for the Graduate Studies graduation ceremony on June 9, 2022. 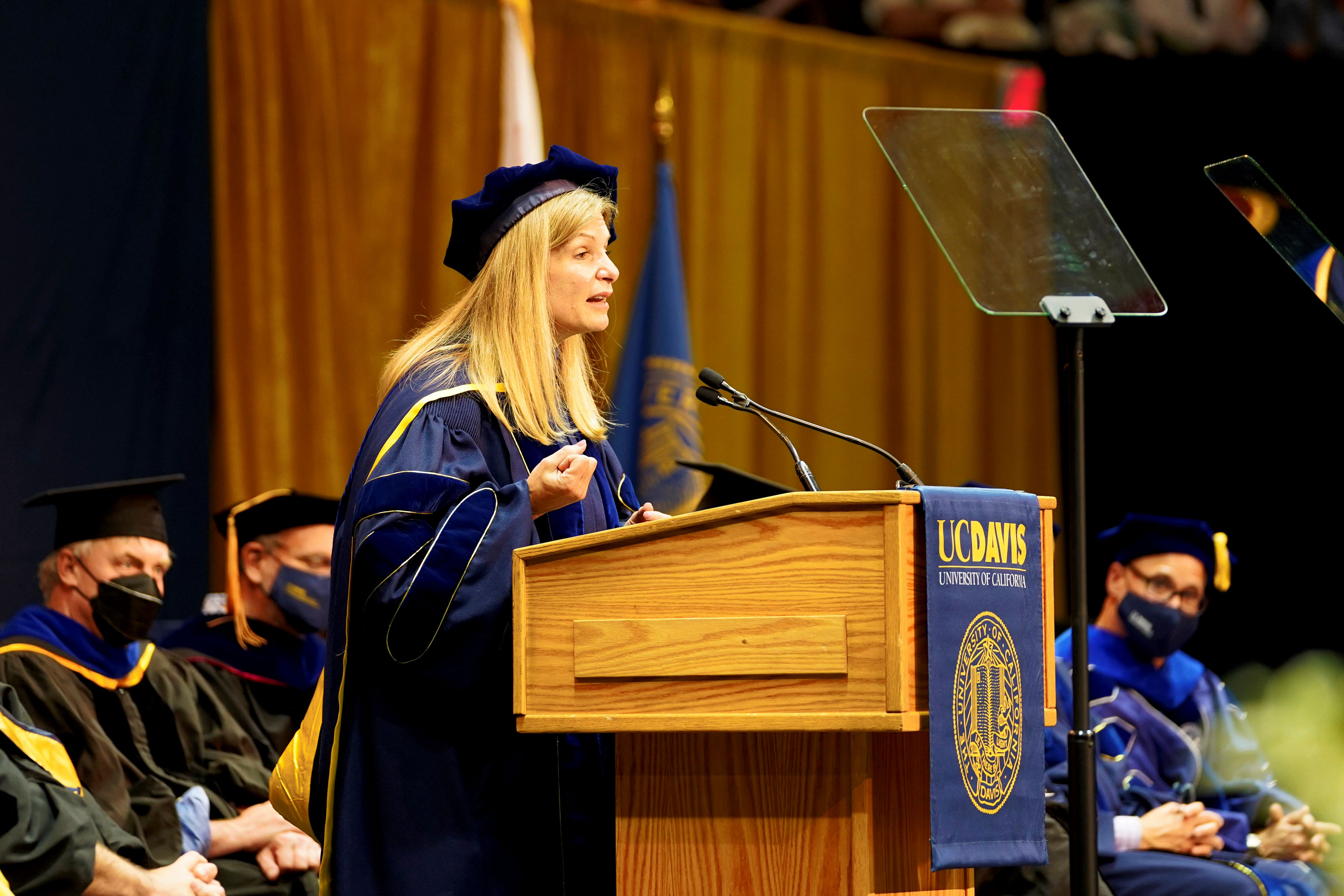 Below are five pieces of wisdom from Lindenfeld’s 2022 commencement speech. Elements of her personal journey and her dedication to using improv to help scientists are interwoven in the stories below.

“We really cannot achieve anything of lasting value and impact without the support of others.”

Lindenfeld came to UC Davis in 1995 after living 10 years in Germany because she saw Davis as “a place where I could really flourish.”

“I was really impressed with the world-class research capacity at UC Davis, and how it was a genuinely welcoming place,” Lindenfeld said. “People went out of their way to make me feel included and that was really important to me. Davis felt like an institution where I was going to be welcome, grounded, happy and able to produce some innovative work.”

Once at UC Davis, Lindenfeld said one of the things that impressed her most about the campus was its deeply interdisciplinary, collaborative culture.

“There’s a commitment to problem solving at Davis and a high level of collaboration is required to do that,” she said. “And I have really shaped my whole career around that idea, as well. My work is focused on generating solutions to real-world problems.”

“Leadership is a team sport.”

While attending the graduate student orientation Lindenfeld learned about a UC Davis leadership development program called Professors for the Future (PFTF) and immediately decided to sign up.

“That was life changing for me,” Lindenfeld said.

PFTF is a competitive leadership development program that provides graduate students and postdoctoral scholars with the skills and knowledge needed to excel in their future careers in academia. Lindenfeld said, in addition to learning practical skills that prepared her for her career, she valued how the program exposed her to a diversity of fields of study.

“What was most powerful for me was being able to connect with other people from across the entire campus,” she said. “I developed a deep appreciation for learning about what others do and to value that. And that is at the core of what I do—look at my job now. Every day I get to work with people from the most diverse fields you can possibly imagine.”

Today, as the leader of both a school and center at Stony Brook, Lindenfeld said the strength of the center lies in diversity of thought that comes from members of her team.

“As a leader, one of the most important lessons I’ve learned is that to be a good leader you need to enable other people to flourish and allow them to do their job,” she said. “Success lies in the power of teams—I relearn that lesson every day.”

“It’s the essence of working together that enables us to make change.”

A few months into her doctorate at UC Davis, Lindenfeld decided to change the focus of her degree from German to the field of cultural studies, which wasn’t yet a formal program. She wanted her work to focus on food in film.

“The entrepreneurial spirit of UC Davis allowed me to step out of the box and do something different,” Lindenfeld said. “Dean Jeff Gibeling was willing to listen to me, allow me to be creative and take that leap with me. It set me up to have this deeply rewarding, incredibly creative and fulfilling career because it set me up to be flexible and dynamic enough that I could shape a career path for myself that moved to the heart of problem solving.”

Lindenfeld started her career at the University of Maine, where her work initially focused on studying representations of food in media. Soon, she felt a pressing need to move her career from a focus on food research to environmental communication. A colleague asked Lindenfeld to help write a proposal for a $20 million NSF grant focused on sustainability science. Lindenfeld agreed and, half-way toward tenure, she decided to retool herself as a social scientist.

“The road to resilience demands empathy and vulnerability.”

As part of that work, Lindenfeld became aware of the Alan Alda Center and was “blown away” by the training that taught scientists to use improvisational theater techniques in science communication. Lindenfeld said that she, like many other scientists she’s since observed, felt a little uncomfortable at first using the techniques; but, by the end of the training, she was inspired to communicate in a more audience-focused way.

“I couldn’t believe how powerful it was. It made so much sense to me,” she said. “It’s about taking responsibility for your messaging, and really listening and developing empathy with your audience so you can meet them where they are at, rather than expect them to understand where you are coming from.”

A year later, the Alan Alda Center asked Lindenfeld, who was leading a public policy research center at University of Maine at the time, to apply to be its director. She decided to apply and accept the job as director of the center in 2016. This role enabled her to have a national impact with her work. She then became Dean of the School of Communication and Journalism at Stony Brook University in 2020. 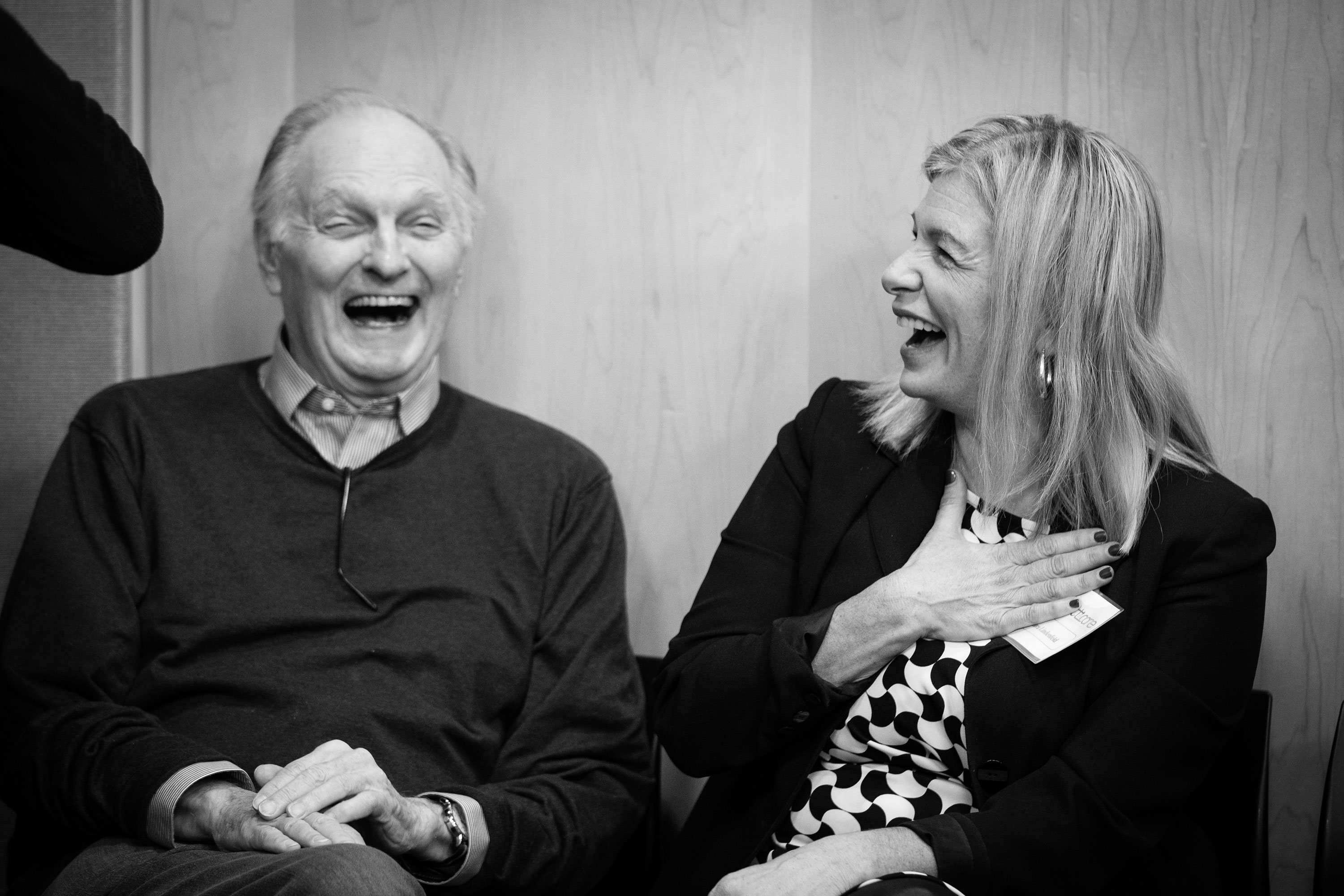 Lindenfeld is a firm believer that, if scientific communication is to be effective, it needs to be authentic and rooted in empathy. It is a philosophy that Lindenfeld wholeheartedly believes in, because she says she’s seen it work—time and time again. The Alda Center has trained more than 20,000 scientists throughout the world, not just in academia but also in industry, corporations, nonprofits, federal agencies and government organizations.

Additionally, with the realities of pandemics and climate change, the need for effective scientific communication has never been greater. However, in Lindenfeld’s experience, scientists need to be mindful of how they build trust when they communicate.

“Shoving science down people’s throats, expecting them to understand the science - it’s called the knowledge deficit model and it doesn’t work,” she said. “Because people come at so many issues from an emotional perspective. If scientists can build trust with people, the information they have to share about scientific findings is much more likely to land with different audiences.”

Lindenfeld said she is motivated by the idea that we, as a society, can make better, more informed decisions about how we shape our collective future. When we communicate science more effectively and persuasively, we can build trust between communities, shareholders and decision-makers.

“If you look at the grand challenges our society is experiencing, I think people are realizing more and more how profoundly important it is to engage with science, as science itself is critical to generating solutions. Communication training and practice are essential to fostering change,” she said. “So, I feel like where I landed in my career is at the sweet spot of this, and it's awe-inspiring to be able to do this work now. But there’s still not enough of it.”

Ringing in a New Era for Graduate Education